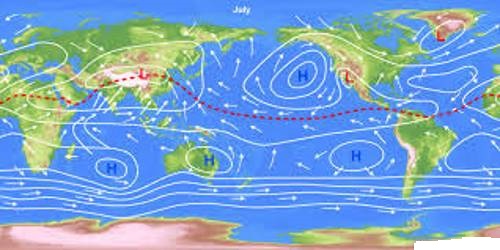 The world distribution of sea level pressure in January and July has been shown in Figures 1 and 2. Near the equator the sea level pressure is low and the area is known as equatorial low. Along 30° N and 30° S are found the high-pressure areas known as the subtropical highs. Further polewards along 60° N and 60° S. the low-pressure belts are termed as the subpolar lows. Near the poles the pressure is high and it is known as the polar high. These pressure belts are not permanent in nature. They oscillate with the apparent movement of the sun. In the northern hemisphere in winter they move southwards and in the summer northwards.

In January, the equatorial low-pressure belt shifts a little south of its mean equatorial position, due to the apparent southward movement of the sun. The lowest pressure pockets occur on the landmasses of South America, South Africa, and Australia because land masses become much hotter than the adjoining oceans. In July, the equatorial low-pressure belt shifts towards the north following the apparent movement of the sun. This shift is maximum in Asia. The landmasses of the northern hemisphere become excessively hot and low-pressure areas develop over them.