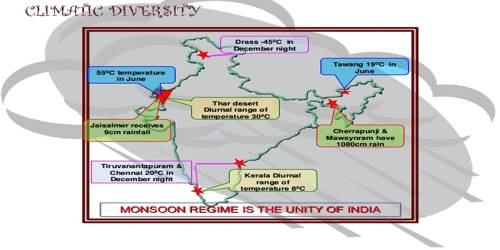 Winter monsoons do not cause rainfall as they move from land to the sea. It is because firstly, they have little humidity, and secondly, due to anticyclonic circulation on land, the possibility of rainfall from them reduces. So, most parts of India do not have rainfall in the winter season. However, there are some exceptions to it:

(i) In northwestern India, some weak temperate cyclones from the Mediterranean Sea cause rainfall in Punjab, Haryana, Delhi, and western Uttar Pradesh. Although the amount is meager, it is highly beneficial for rabi crops. The precipitation is in the form of snowfall in the lower Himalayans. It is this snow that sustains the flow of water in the Himalayan rivers during the summer months. The precipitation goes on decreasing from west to cast in the plains and from north to south in the mountains. The average winter rainfall in Delhi is around 53 mm. In Punjab and Bihar, rainfall remains between 25 mm and 18 mm respectively. (iii) Arunachal Pradesh and Assam in the northeastern parts of India also have rains between 25 mm and 50 mm during these winter months.

(iv) During October and November, northeast monsoon while crossing over the Bay of Bengal, picks up moisture and causes torrential rainfall over the Tamil Nadu coast, southern Andhra Pradesh, southeast Karnataka, and southeast Kerala.