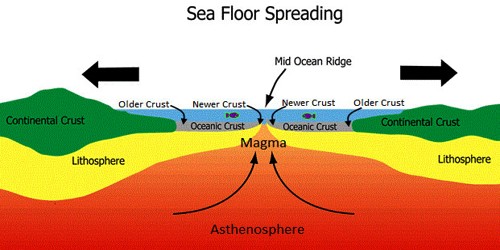 The concept of Sea Floor Spreading

The post-drift studies provided substantial information that was not available at the time Wegener put forth his concept of continental drift. Principally, the mapping of the ocean floor and palaeomagnetic studies of rocks from oceanic regions revealed the following facts:

(i) It was realized that all along the mid-oceanic ridges, volcanic eruptions are common and they bring huge amounts of lava to the surface in this area.

(ii) The rocks equidistant on either side of the crest of mid-oceanic ridges show remarkable similarities in terms of the period of formation, chemical compositions, and magnetic properties. Rocks closer to the mid-oceanic ridges are normal polarity and are the youngest. The age of the rocks increases as one move away from the crest. 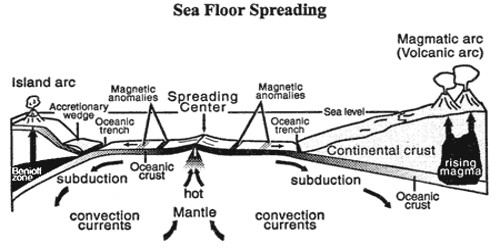 (iv) The sediments on the ocean floor are unexpectedly very thin. Scientists were expecting, if the ocean floors were as old as the continent, to have a complete sequence of sediments for a period of much longer duration. However, nowhere was the sediment column found to be older than 200 million years.

(v) The deep trenches have deep-seated earthquake occurrences while in the mid-oceanic ridge areas, the quake foci have shallow depths.

These facts and a detailed analysis of magnetic properties of the rocks on either side of the mid-oceanic ridge led Hess (1961) to propose his hypothesis, known as the “sea floor spreading”. Hess argued that constant eruptions at the crest of oceanic ridges cause the rupture of the oceanic crust and the new lava wedges into it, pushing the oceanic crust on either side. The ocean floor thus spreads.