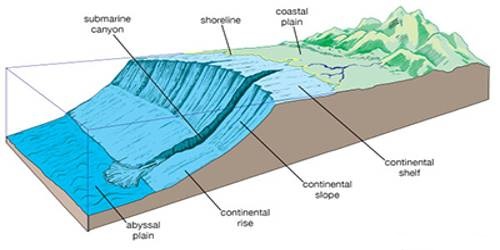 A mid-oceanic ridge is composed of two chains of mountains separated by a large depression. The mountain ranges can have peaked as high as 2,500 m and some even reach above the ocean’s surface. Iceland, a part of the mid-Atlantic Ridge, is an example.

It is a mountain with pointed summits, rising from the seafloor that does not reach the surface of the ocean. Seamounts are volcanic in origin. These can be 3,000-4,500 m tall. The Emperor seamount, an extension of the Hawaiian Islands in the Pacific Ocean, is a good example.

These are deep valleys, some comparable to the Grand Canyon of the Colorado River. They are sometimes found cutting across the continental shelves and slopes, often extending from the mouths of large rivers. The Hudson Canyon is the best-known canyon in the world.

It is a flat-topped seamount. They show evidence of gradual subsidence through stages to become flat-topped submerged mountains. It is estimated that more than 10,000 seamounts and guyots exist in the Pacific Ocean alone.

These are low islands found in the tropical oceans consisting of coral reefs surrounding a central depression. It may be a part of the sea (lagoon), or sometimes form enclosing a body of fresh, brackish, or highly saline water.