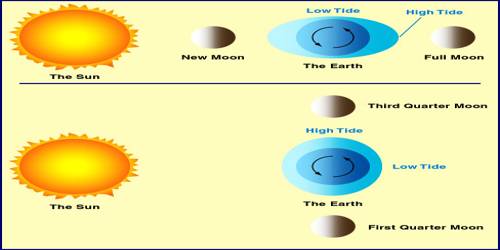 The periodical rise and fall of the sea level, once or twice a day, mainly due to the attraction of the sun and the moon, is called a tide. Movements of water caused by meteorological effects (winds and atmospheric pressure changes) are called surges. Surges are not regular like tides. The study of tides is very complex, spatially and temporally, as it has great variations in frequency, magnitude, and height. Gravity is one major force that creates tides. In 1687, Sir Isaac Newton explained that ocean tides result from the gravitational attraction of the sun and moon on the oceans of the earth (Sumich, J.L., 1996).