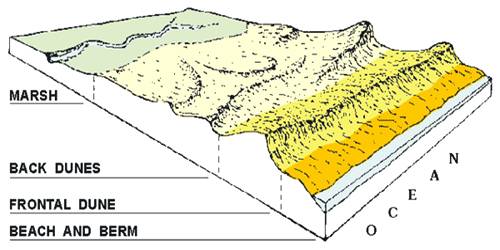 Beaches are characteristic of shorelines that are dominated by deposition but may occur as patches along even the rugged shores. Most of the sediment making up the beaches comes from land carried by the streams and rivers or from wave erosion. Beaches are temporary features. The sandy beach which appears so permanent may be reduced to a very narrow strip of coarse pebbles in some other season. Most of the beaches are made up of sand-sized materials. Beaches called shingle beaches contain excessively small pebbles and even cobbles. 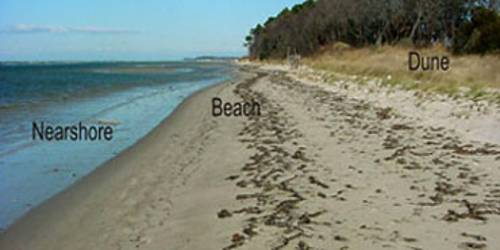 Beaches are generally defined as stretches of sand or smaller loose particles (such as pebbles, shells, or gravel) that exist between the water and the land. Dunes are landforms that occur when there is a sufficient supply of sand or sediment and strong enough wind to promote sediment transport. Just behind the beach, the sands lifted and winnowed from over the beach surfaces will be deposited as sand dunes. Sand dunes forming long ridges parallel to the coastline are very common along low sedimentary coasts.