Polar climates exist poleward beyond 70° latitude. These climates have year-round cold temperatures with the warmest month less than 10° Celsius. Polar climates are found in the northern coastal areas of North America, Europe, Asia, and on the landmasses of Greenland and Antarctica. Two minor climate types exist. ET or polar tundra is a climate where the soil is permanently frozen to depths of hundreds of meters, a condition known as permafrost. Vegetation is dominated by mosses, lichens, dwarf trees and scattered woody shrubs. 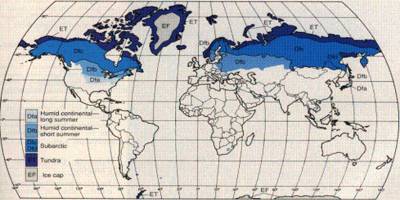 Tundra Climate (ET): The tundra climate (ET) is so called after the types of vegetation, like low growing mosses, lichens, and flowering plants. This is the region of permafrost where the subsoil is permanently frozen. The short growing season and waterlogging support only low growing plants. During summer, the tundra regions have a very long duration of daylight.

Ice Cap Climate (EF): The ice cap climate (EP) occurs over interior Greenland and Antarctica. Even in summer, the temperature is below freezing point. This area receives very little precipitation. The snow and ice get accumulated and the mounting pressure causes the deformation of the ice sheets and they break. They move as icebergs that float in the Arctic and Antarctic waters. Plateau Station Antarctica, 79°S, portrays this climate.