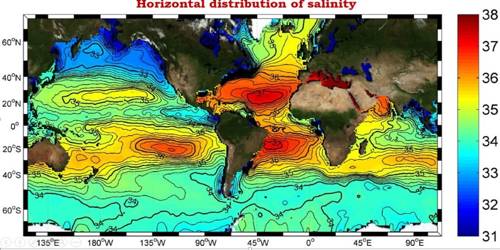 All waters in nature, whether rainwater or ocean water, contain dissolved mineral salts. Salinity is the term used to define the total content of dissolved salts in seawater. It is calculated as the amount of salt (in gm) dissolved in 1,000 gm (1 kg) of seawater. It is usually expressed as parts per thousand. The salinity for normal Open Ocean ranges between 33 percent and 37 percent. In the landlocked

The Red Sea, it is as high as 41 percent, while in the estuaries and the Arctic, the salinity fluctuates from 0 – 35 percent, seasonally. In hot and dry regions, where evaporation is high, the salinity sometimes reaches 70 percent. The salinity variation in the Pacific Ocean is mainly due to its shape and larger areal extent. Salinity decreases from 35 – 31 percent in the western parts of the northern hemisphere because of the influx of melted water from the Arctic region. In the same way, after 15° – 20° south, it decreases to 33 percent.

The average salinity of the Atlantic Ocean is around 36 percent. The highest salinity is recorded between 15° and 20° latitudes. Maximum salinity (37 percent) is observed between 20° N and 30° N and 20° W – 60° W. It gradually decreases towards the north. The North Sea, in spite of its location in higher latitudes, records higher salinity due to more saline water brought by the North Atlantic Drift. Baltic Sea records low salinity due to the influx of river waters in large quantity. The Mediterranean Sea records higher salinity due to high evaporation. Salinity is, however, very low in the Black Sea due to enormous freshwater influx by rivers.

The average salinity of the Indian Ocean is 35 percent. The low salinity trend is observed in the Bay of Bengal due to the influx of river water by the river Ganga. On the contrary, the Arabian Sea shows higher salinity due to high evaporation and the low influx of fresh water. 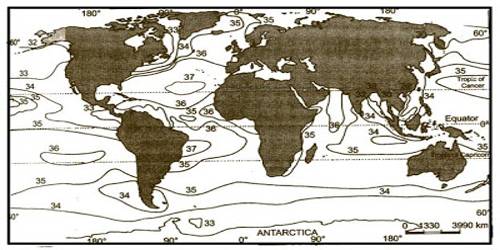 The figure shows the salinity of the World’s oceans.