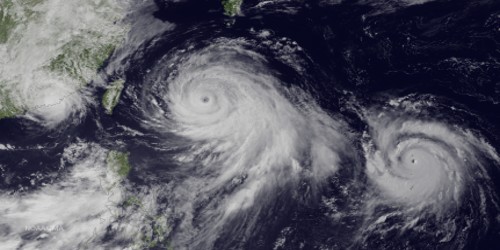 Tropical cyclones are characterized by large pressure gradients. The center of the cyclone is mostly a warm and low-pressure, cloudless core known as the eye of the storm. Generally, the isobars are closely placed to each other showing high-pressure gradients. The main parts of a tropical cyclone are the rainbands, the eye, and the eyewall. Air spirals in toward the center in a counter-clockwise pattern in the northern hemisphere, and out the top in the opposite direction. The eye of the storm is in fact where the storm is the mainly quiet, but it doesn’t stay that way for very long. The eye will typically be somewhere around 10 kilometers in diameter and is the core of the storm. Tropical cyclones are also made up of rainbands. These rainbands actually rotate and help the storm to circulate. Normally, it varies between 14-17 mb/100 km, but sometimes it can be as high as 60 mb/100km. Expansion of the wind belt is about 10-150 km from the center.

Typical hurricane strength tropical cyclones are about 300 miles (483 km) wide even though they can vary considerably. Once produced, tropical cyclones can have a lifespan varying from a few days to a few weeks. Not all of them grow the whole way to full typhoon status. In fact, over the western North Pacific and the South China Sea, only about half of them on the average manage to attain typhoon intensity.