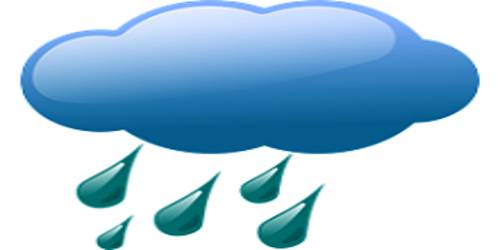 Rainfall is the amount of precipitation usually measured by the depth in inches. On the basis of origin, rainfall may be classified into three main types – Convectional Rain, Orographic or Relief Rain and the Cyclonic or Frontal Rain. 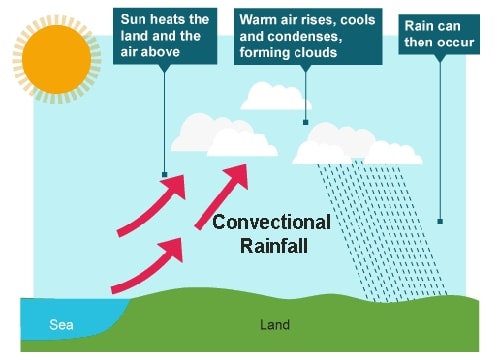 The air on being heated becomes light and rises up in convection currents. As it rises, it expands and loses heat and consequently, condensation takes place and cumulous clouds are formed. With thunder and lightning, heavy rainfall takes place but this does not last long. Such rain is common in the summer or in the hotter part of the day. It is very common in the equatorial regions and interior parts of the continents, particularly in the northern hemisphere. 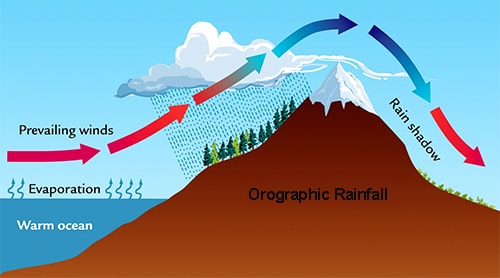 When the saturated air mass comes across a mountain, it is forced to ascend and as it rises, it expands; the temperature falls, and the moisture is condensed. The chief characteristic of this sort of rain is that the windward slopes receive greater rainfall. After giving rain on the windward side, when these winds reach the other slope, they descend, and their temperature rises. Then their capacity to take in moisture increases and hence, these leeward slopes remain rainless and dry. The area situated on the leeward side, which gets less rainfall is known as the rain-shadow area It is also known as the relief rain. 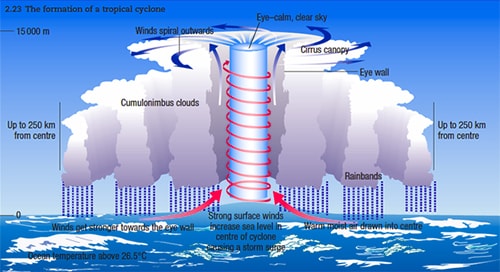 Cyclonic rainfall, also known as frontal rain, is caused when two air masses of different temperatures meet. This rain occurs where two air masses meet and form a ‘front’. This type of rain usually is due to the occurrence of cyclonic activities and is witnessed along fronts. The warmer, moisture-laden air rises over the colder air as a ‘warm front’. As the air rises it cools, and its relative humidity increases. Clouds form as water vapor condenses, and then fall as rain.