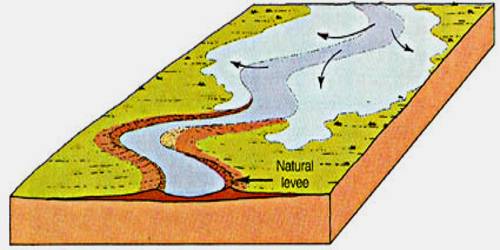 Levees occur in the lower course of a river when there is an increase in the volume of water flowing downstream and flooding occurs. Natural levees and point bars are some of the important landforms found associated with floodplains. Natural levees are found along the banks of large rivers. They are low, linear, and parallel ridges of coarse deposits along the banks of rivers quite often cut into individual mounds. It is formed when the movement of water pushes sediment to the side of rivers and creeks. 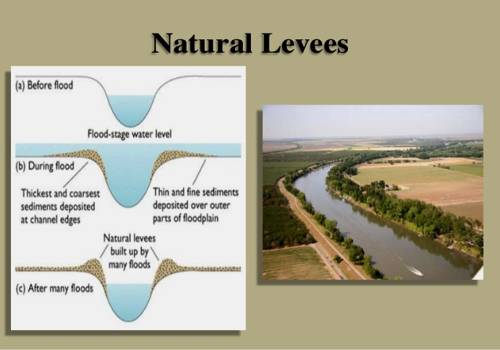 Sediment that has been eroded further upstream is transported downstream.  When a flood occurs, the river loses energy. After many floods, the sediment builds up to increase the height of the river banks, meaning that the channel can carry more water (a greater discharge) and flooding is less likely to occur in the future.

The natural movement of a body of water pushes sediment to the side, creating a natural levee. The banks of a river are often slightly elevated from the river bed. The banks form levees made of sediment, silt, and other materials pushed aside by the flowing water. During flooding as the water spills over the bank, the velocity of the water comes down and large-sized and high specific gravity materials get dumped in the immediate vicinity of the bank as ridges. They are high nearer the banks and slope gently away from the river. The levee deposits are coarser than the deposits spread by floodwaters away from the river. When rivers shift laterally, a series of natural levees can form.