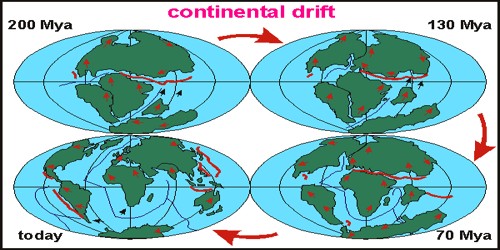 Observe the shape of the seashore of the Atlantic Ocean. You will be amazed by the proportion of the coastlines on either side of the ocean. No wonder, many scientists thought of this resemblance and measured the chance of the two Americas, Europe, and Africa, to be once joined together. From the identified records of the history of science, it was Abraham Ortelius, a Dutch mapmaker, who first planned such a possibility as early as 1596. Antonio Pellegrini drew a map showing the three continents together. However, it was Alfred Wegener—a German meteorologist who put forth a comprehensive argument in the form of “the continental drift theory” in 1912. This was regarding the distribution of the oceans and the continents.

Alfred Wegener states that parts of the Earth’s crust gradually drift atop a liquid core. The fossil record supports and gives credence to the theories of continental drift and plate tectonics. 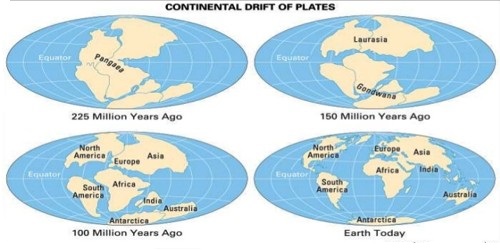 According to Wegener, all the continents formed a single continental mass, a mega ocean surrounded by the same. The supercontinent was named PANGAEA, which meant all earth. The mega-ocean was called PANTHALASSA, meaning all water. He argued that, around 200 million years ago, the supercontinent, Pangaea, began to split. Pangaea first broke into two large continental masses as Laurasia and Gondwanaland forming the northern and southern components respectively.