Home Geology Monsoons and the Economic Life in India Subcontinent 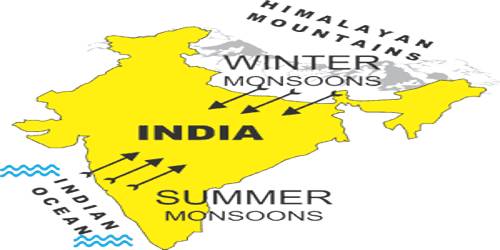 Monsoons and the Economic Life in India Subcontinent

Monsoon is a familiar with a little known climatic phenomenon. The monsoon of South Asia is among several geographically distributed global monsoons. The primary cause of monsoons is the difference between annual temperature trends over land and sea. It affects the Indian subcontinent, where it is one of the oldest and most anticipated weather phenomena and an economically important pattern every year from June through September, but it is only partly understood and notoriously difficult to predict.

(i) Monsoon is that axis around which revolves the entire agricultural cycle of India. It is because about 64 percent people of India depend on agriculture for their livelihood and agriculture itself is based on southwest monsoon.

(ii) Except for the Himalayas, all the parts of the country have a temperature above the threshold level to grow the crops or plants throughout the year.

(iv) Variability of rainfall brings droughts or floods every year insane parts of the country.

(v) Agricultural prosperity of India depends very much on timely and adequately distributed rainfall. If it fails, agriculture is adversely affected particularly in those regions where means of irrigation are not developed.

(viii) Regional climatic variation in India is reflected in the vast variety of food, clothes and house types.