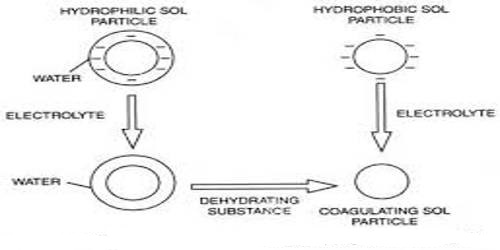 Colloidal Electrolyte is an electrolyte that yields at least one type of ion in the colloidal size range. If a very small quantity of soap, say sodium oleate, is dissolved in water, the solution will behave like a solution of electrolyte since the soap is a salt. If the concentration of the soap is gradually increased a certain critical concentration is reached beyond which the undissociated molecules and anion of the soap form aggregate and assume colloidal dimension. These micelles, as they are called, strongly adsorb ions from the solution and become eclectically charged. Some unabsorbed ions are always left in the solution. The micelles behave both like a colloid and an electrolyte. They are, therefore, called colloidal electrolytes. The critical concentration above which the micelles are formed is called the critical micelle concentration (CMC).

This can be determined from either the electrical conductivity or surface tension measurements of the solutions. Not Only soaps but many other substances with an ionizable group and a long hydrocarbon chain or similar tail behave in the same way, Alkyl sulphonates, sulfates etc belong to this class. Several dyes with the ionizable end, such as congo red, are colloidal electrolytes.