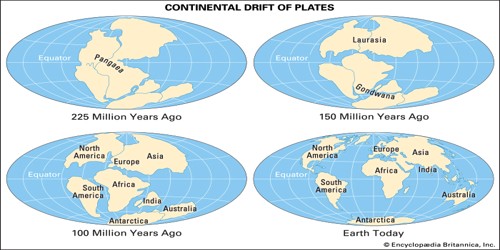 It is interesting to note that for continental drift, the majority of the facts were collected from the continental areas in the form of allocation of flora and fauna or deposits like finite. A number of discoveries during the post-war era added the latest information to geological literature.

Particularly, the information collected from the ocean floor mapping provided new dimensions for the study of the distribution of oceans and continents.

Holmes argued that there exists a system of such currents in the entire mantle portion. This was an attempt to provide an explanation to the Issue of force. on the origin of which contemporary scientists discarded the continental drift theory.

Mapping of the Ocean Floor

Detailed research of the ocean configuration revealed that the ocean floor is not just a vast plain but it is full of relief. In the post-war period, a geologist was able to collect information from ocean floor. Expeditions to map the oceanic floor in the post-war period provided a detailed picture of the ocean relief and indicated the existence of submerged mountain ranges as well as deep trenches, mostly located close to the continental margins. Dating of rocks from oceanic crust reveals that they are much younger than continental areas. The mid-oceanic ridges were found to be most active in terms of volcanic eruptions. The dating of the rocks from the oceanic crust revealed the reality that the latter is much younger than the continental areas. Rocks on either side of the crest of oceanic ridges and having equidistant locations from the crest were found to have notable similarities both in terms of their constituents and their age.

Particularly, the mapping of the ocean floor and further studies of rocks from the oceanic region revealed the following facts:

(i) All along the mid-oceanic ridges, volcanic eruptions are scattered which bring out huge amounts of lava to the surface in this area.

(ii)The rocks central on either side of the ridge of mid-oceanic ridges have notable similarities in terms of a period of the structure, chemical compositions, and magnetic properties.

(iv)The deep trenches have deep-seated earthquake occurrences while in the mid-oceanic ridge areas, the quake foci have shallow depths.

Evolution of the Himalayan Drainage System