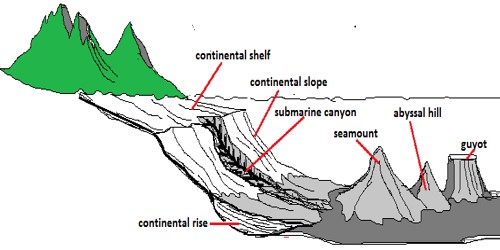 The ocean floor may be segmented into three major divisions based on the depth as well as the forms of relief. These divisions are continental margins, deep-sea basins, and mid-ocean ridges.

These are extensive plains that lie between the continental margins and mid-oceanic ridges. The abyssal plains are the areas where the continental sediments that move beyond the margins get deposited. These areas are the smoothest and flattest surfaces on Earth, covered with sediments such as silt and mud. These plains are more familiar in the Atlantic Ocean and unusual in the Pacific Ocean.

They are longer than the longest mountain ranges on the continents. Common characteristics are –

This forms an interconnected chain of mountain system within the ocean. It is the longest mountain-chain on the surface of the earth through submerged under the oceanic waters. It is characterized by a central rift system at the crest, a fractionated plateau and flank zone all along its length. The rift system at the crest is the zone of intense volcanic activity. In the previous chapter, you have been introduced to this type of volcanoes as mid-oceanic volcanoes. The mid-oceanic ridge constitutes 23% of the Earth’s surface. In the center of the mid-oceanic ridge is a rift valley, between 30 to 50 kilometers wide, that dissects 1000 to 3000 meters deep into the ridge structure.

They are a group of the underwater mountain and it is created by an outpouring of magma. Ridges can be found rising from a depth of about 5 kilometers to a consistent depth of about 2.5 kilometers and can be hundreds of miles wide. These features are concerned in the invention of new oceanic crust from volcanic fissures produced by mantle upwelling.