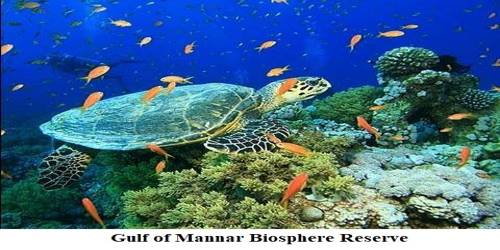 A Biosphere Reserve is a unique and representative ecosystem of terrestrial and coastal areas which are internationally recognized within the framework of UNESCO’s Man and Biosphere (MAB) Program. They are globally familiar, selected by national governments and stay under the independent authority of the states where they are located. The Gulf of Mannar Biosphere Reserve is the first marine biosphere reserve in Asia, located in the Southern part of the Bay of Bengal. 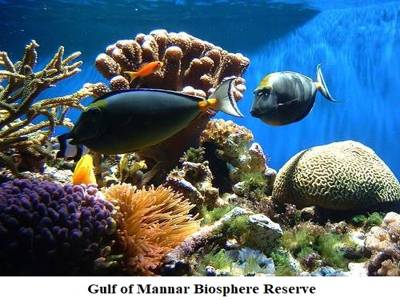 The Gulf of Mannar Biosphere Reserve covers an area of 105,000 hectares on the southeast coast of India. It is one of the world’s richest regions from a marine biodiversity perspective. The biosphere reserve comprises 21 islands with estuaries, beaches, forests of the nearshore environment, seagrasses, coral reefs, salt marshes, and mangroves. The Reserve is home to seahorses, 450 species of fish, hundreds of species of sea cucumbers, sponges, all kinds of corals and species of seagrass found nowhere else. Among the Gulf’s 3,600 plant and animal species are the globally endangered sea cow (Dugong dugon) and six mangrove species, endemic to Peninsular India. The Reserve’s fishery is dominated by fish species like lesser sardine, silver belly, mackerel, anchovy, threadfin, bream, lobster, mollusks, and prawns. The Gulf of Mannar is the biologically richest coastal region in India with 3,600 species of plants and animals known to live within its boundaries.