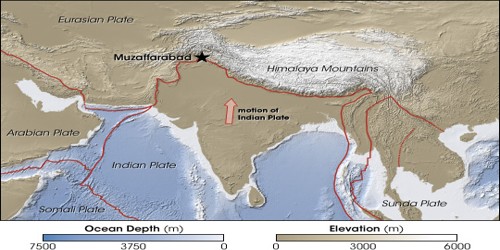 The Indian plate includes Peninsular India and the Australian continental portions. The subduction zone along the Himalayas forms the northern plate boundary in the form of continent – continent convergence. In the east, it extends through Rakinyoma Mountains of Myanmar towards the island are along the Java Trench. The eastern margin is a spreading site lying to the east of Australia in the form of an oceanic ridge in SW Pacific. The Western margin follows Kirthar Mountain of Pakistan. It further extends along the Makrana coast and joins the spreading site from the Red Sea rift southeastward along the Chagos Archipelago. The boundary between India and the Antarctic plate is also marked by oceanic ridge (divergent boundary) running in roughly W-E direction and merging into the spreading site, a little south of New Zealand. 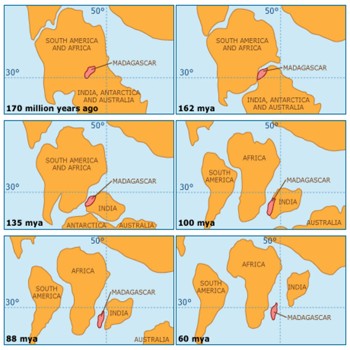 India was a large island situated off the Australian coast, in a vast ocean. The Tethys Sea separated it from the Asian continent till about 225 million years ago. India is supposed to have started her northward journey about 200 million years ago at the time when Pangaea broke. India collided with Asia about 40-50 million years ago causing rapid uplift of the Himalayas. The positions of India since about 71 million years till the present are shown in the Figure. It also shows the position of the Indian subcontinent and the Eurasian plate. About 140 million years before the present, the subcontinent was located as south as 50°S, latitude. The two major plates were separated by the Tethys Sea and the Tibetan block was closer to the Asiatic landmarks. During the movement of the Indian plate towards the Asiatic plate, a major event that occurred was the outpouring of lava and formation of the Deccan Traps. This started somewhere around 60 million years ago and continued for a long period of time.

Note that the subcontinent was still close to the equator. From 40 million years ago and thereafter, the event of formation of the Himalayas took place. Scientists believe that the process is still continuing and the height of the Himalayas is rising even to this date.