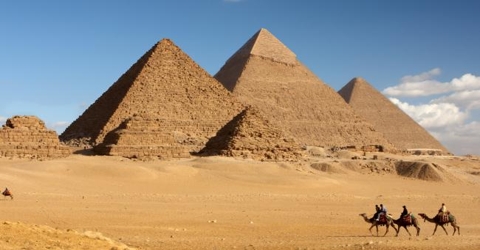 In its most common form, a pyramid is a massive stone or brick structure. It has a square base and four sloping triangular sides that meet in a point at the top. Pyramids have been built by different people at various times in history. Probably the best-known pyramids are of ancient Egypt, which were built to protect the tombs of rulers or other important persons. One of the seven ancient wonders of the world, the great pyramids of Giza is marvelous feats of architecture. 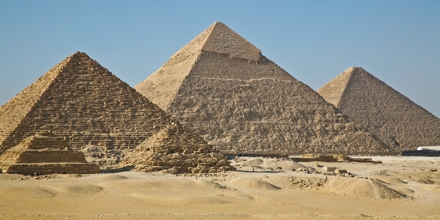 The grand structures were built between 2589 BC and 2504 BC. In the 26th century BC, three great Egyptian kings-Khufu, his son Khafre and his grandson Menkure; ordered the construction of three huge pyramids that would serve as their tombs. The first of these, the Great Pyramid, is the largest pyramid that has ever been built. It stands with the other two pyramids and the Great Sphinx in a cluster near the town of Giza, just 12 miles from Cairo.

King Khufu’s Pyramid rests on a base that covers 13 acres. Each side of this base is about 756 feet long. The Great Pyramid once rose to a height of 481 feet, but the top has been stripped. Khafre’s pyramid was originally only 10 feet lower than his father’s tomb, Menkure’s pyramid with a bright at 218 feet smallest of the three. The pyramid is estimated to have around 2,300,000 stone blocks that weigh from 2 to 30 tons each and there are even some blocks that weigh over 50 tons.

The Egyptian rulers ordered the pyramids to be built because they feared that their remains would be disturbed by grave robbers. They chose a site on the west side of the Nile River. This was because they believed that the home of the dead was towards the setting sun. The burial chambers were placed under the exact centres of the pyramids. Passageways leading to the chambers were sealed with heavy strone.

The Greek historian Herodotus estimated that 100,000 men labored for 20 years to complete the Great Pyramid. 2.3 million Blocks of stone were used to build this Pyramid. The blocks weighing an average of 2½ tons each, were perhaps cut from limestone quarries that have been found near the pyramids. More than 4,000 years later, the Egyptian pyramids still retain much of their majesty, providing a glimpse into the country’s rich and glorious past.