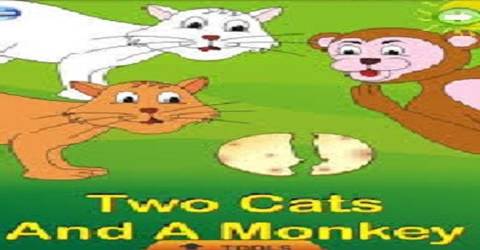 One day two cats found a piece of bread somewhere. Each of them wanted to have the larger share of it. They began quarrelling. They could not decide how to deal out with that piece of bread. They suggested too to the monkey who had a scale. So they went to the monkey to divide the bread properly. The cunning monkey divided the piece in such a way that it was not equally divided. Then he cut a small part of a piece and ate that instantly. Then the monkey brought a pair of scales and tore the bread into two pieces. He put the pieces on the scales. The monkey told that one piece was heavier than the other. He took the heavier piece and bit a small piece from it. Then the other piece became heavier. Then the monkey took a portion from that piece and put it on the scales. The pieces remained unequal even now. And the monkey did the same thing again and again. This was larger than the other. Again, the dish of the scale was unequal and the monkey ate another small part of the larger portion.

He continued this method and the piece of bread became smaller gradually. The cats understood the monkey’s crafty trick and ordered the monkey to stop that. The monkey stopped his deception but claimed the rest of the bread as his charge.

Moral: Quarrel creates the advantage for a third person.