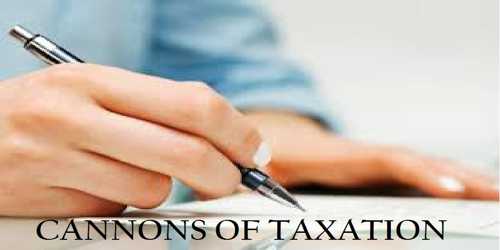 Adam Smith gave four principles of taxation which he called the canons of taxation. Some other writers have also prescribed some other principles. A brief description of them is as follows –

A good tax system is one with is designed on the basis of an appropriate set of principles (rules). The tax system should strike a balance between the interest of the taxpayer and that of tax authorities. Adam Smith was the first economist to develop a list of Canons of Taxation. These canons are still regarded a characteristics or features of a good tax system.

(b) Canon of Certainty: The canon suggested that the tax which an individual has to pay should be certain and not arbitrary. The taxpayer should be well informed as to the time, amount and method of the payment of tax.

(c) Canon of Convenience: Every tax ought to be levied at the time or in the manner in which it is most likely to be convenient for the contributor to pay it.

(d) Canon of Economy: Every tax ought to be so contributed as both to take out and to keep out of pockets of the people a little as possible, over and above what it brings into the public treasury of the state.

In addition to the above fours canons, the economists have added few more.

How Auditors Assess the Control Risk?