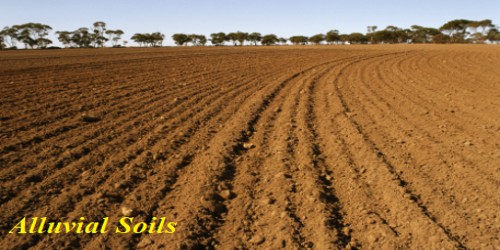 India has varied relief features, landforms, climatic realms, and vegetation types. These have contributed to the development of various types of soils in India. Geologically, Indian soils can broadly be divided into soils of peninsular India and soils of extra-peninsular India.

Alluvial soils are widespread in the northern plains and the river valleys. These soils are formed mainly due to silt deposited by Indo-Gangetic-Brahmaputra rivers. In coastal regions, some alluvial deposits are formed due to wave action. These soils cover about 40 percent of the total area of the country. They are depositional soils, transported and deposited by rivers and streams. Through a narrow corridor in Rajasthan, they extend into the plains of Gujarat. In the Peninsular region, they are found in deltas of the east coast and in the river valleys. They are the largest soil group covering about 15 lakh sq km or about 6 percent of the total area.

The alluvial soils vary in nature from sandy loam to clay. They are generally rich in potash but poor in phosphorous. In the Upper and Middle Ganga plain, two different types of alluvial soils have developed, viz. Khadar and Bhangar. Khadar is the new alluvium and is deposited by floods annually, which enriches the soil by depositing fine silts. Bhangar represents a system of older alluvium, deposited away from the floodplains. Both the Khadar and Bhangar soils contain calcareous concretions (Kankars). These soils are more loamy and clayey in the lower and middle Ganga plain and the Brahmaputra valley. The sand content decreases from the west to cast.

The color of the alluvial soils varies from the light grey to ash grey. Its shades depend on the depth of the deposition, the texture of the materials, and the time taken for attaining maturity. Alluvial soils are intensively cultivated.