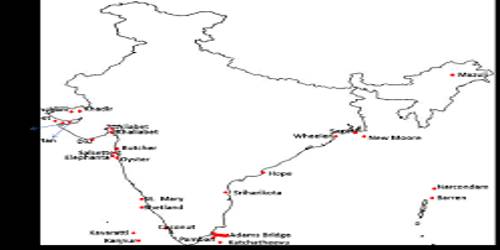 The Islands of Indian Subcontinent

There are over a thousand islands in India, however, there are two prominent groups of islands (archipelago) in India. There are two major island groups in India – one in the Bay of Bengal and the other in the Arabian Sea. The Bay of Bengal island groups consists of about 572 islands/islets. These are situated roughly between 6°N-14°N and 92°E -94°E. The two principal groups of islets include Ritchie’s archipelago and the Labyrinth Island. The entire group of island is divided into two broad categories – the Andaman in the north and the Nicobar in the south. They are separated by a water body which is called the Ten-degree channel. It is believed that these islands are an elevated portion of submarine mountains. However, some smaller islands are volcanic in origin. Barren Island, the only active volcano in India is also situated in the Nicobar Islands. The coastal line has some coral deposits and beautiful beaches. These islands receive convectional rainfall and have an equatorial type of vegetation. The islands of the Arabian Sea include Lakshadweep and Minicoy. These are scattered between 8°N-12°N and 71°E -74°E longitude. These islands are located at a distance of 280 km-480 km off the Kerala coast. The entire island group is built of coral deposits. There are approximately 36 islands of which 11 are inhabited. Minicoy is the largest island with an area of 453 sq. km. The entire group of islands is broadly divided by the Eleventh-degree channel, north of which is the Amini Island and to the south of the Canannore Island. The Islands of this archipelago have storm beaches consisting of unconsolidated pebbles, shingles, cobbles, and boulders on the eastern seaboard.