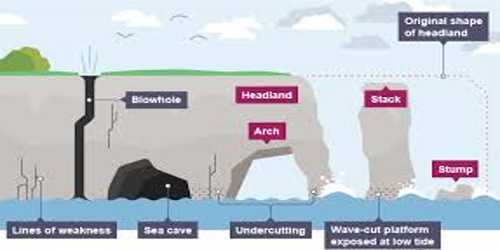 Wave-cut cliffs and terraces are two forms usually found where erosion is the dominant shore process. Almost all sea cliffs are steep and may range from a few meters to 30 meters or even more. At the foot of such cliffs, there may be a flat or gently sloping platform covered by rock debris derived from the sea cliff behind. Such platforms occurring at elevations above the average height of waves is called a wave-cut terrace. The lashing of waves against the base of the cliff and the rock debris that gets smashed against the cliff along with lashing waves create hollows and these hollows get widened and deepened to form sea caves. 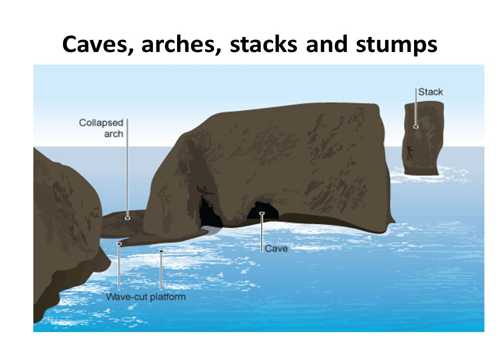 The roofs of caves collapse and the sea cliffs recede further inland. The retreat of the cliff may leave some remnants of rock standing isolated as small islands just off the shore. Such resistant masses of rock, originally parts of a cliff or hill are called sea stacks. Like all other features, sea stacks are also temporary and eventually, coastal hills and cliffs will disappear because of wave erosion giving rise to narrow coastal plains, and with onrush of deposits from over the land behind may get covered up by alluvium or may get covered up by shingle or sand to form a wide beach.

Variability of Solar Radiation at the Surface of Earth