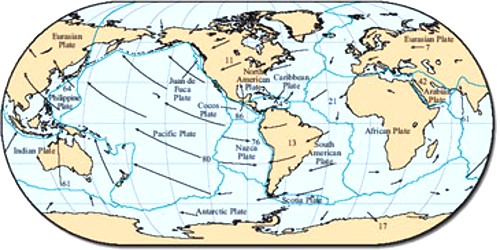 The strips of normal and reverse magnetic field that parallel the mid-oceanic ridges help scientists determine the rates of plate movement. These rates vary considerably. The Arctic Ridge has the slowest rate (less than 2.5 cm/yr), and the East Pacific Rise near Easter Island, in the South Pacific about 3,400 km west of Chile, has the fastest rate (more than 15 cm/yr). 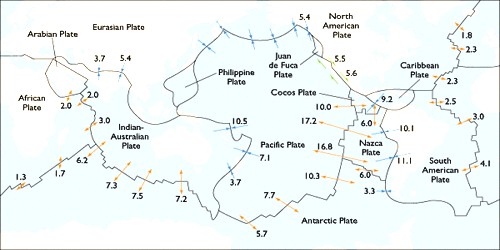 The majority of the study shows that the plates move at the usual rate of between approximately 0.60 cm/yr to 10 cm/yr. Some sources state that in the North Atlantic, the rate of movement is only about 1 cm (about 0.4 in) per year, while in the Pacific it amounts to more than 4 cm (almost 2 in) annually, while others say that plates, in general, travel from 5 to 10 cm/yr.

The Eurasian Plate is moving away from the North American Plate at a rate is about 3cm per year. That is about the same rate at which your fingernails will grow.

What is the Hydrosphere?