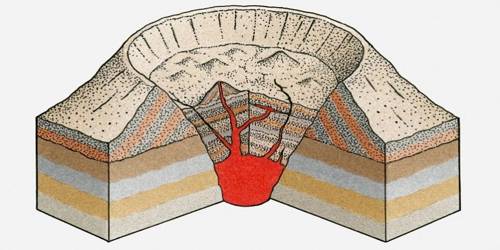 Caldera Volcano: A caldera is a volcanic feature formed by the collapse of a volcano into itself, making it a large, special form of volcanic crater. Explosive type of volcano that leaves a large circular depression. Some of these depressions can be as large as 40 km in diameter. These volcanoes form when wet granitic magma quickly rises to the surface of the Earth. Calderas are some of the most magnificent features on Earth. They are huge volcanic craters that form by two dissimilar methods: 1) an explosive volcanic eruption; or, 2) collapse of surface rock into an empty magma chamber. The earth surface then collapses down into the partly emptied magma chamber, leaving an enormous depression at the surface (from one to dozens of kilometers in diameter). Although sometimes described as a basin, the characteristic is, in fact, a form of the sinkhole, as it is formed through subsidence and fall down to a certain extent than an outburst or collision. Only seven known caldera-forming collapses have occurred since the start of the 20th century, most recently at Bárðarbunga volcano in Iceland.