Eddy currents are currents induced in conductors to oppose the change in flux that generated them. When a conductor in the form of a disc or a metallic plate as shown in Figure, swings between the poles of a magnet, eddy currents are set up inside the plate. This current acts in a direction so as to oppose the motion of the conductor with a strong retarding force, that the conductor almost comes to rest. If the metallic plate with holes drilled in it is made to swing inside the magnetic field, the effect of eddy current is greatly reduced consequently the plate swings freely inside the field. Eddy current can be minimised by using thin laminated sheets instead of solid metal. 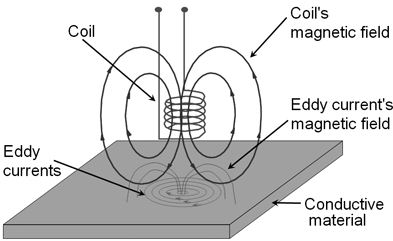 Define and Describe on Solenoid

What is Voltage Sensitivity of a Galvanometer?