The simple cell or voltaic cell consists of two electrodes, one of copper and the other of zinc dipped in a solution of dilute sulphuric acid in a glass vessel (Figure). On connecting the two electrodes externally, with a piece of wire, current flows from copper to zinc outside the cell and from zinc to copper inside it. The copper electrode is the positive pole or copper rod of the cell and zinc is the negative pole or zinc rod of the cell. The electrolyte is dilute sulphuric acid. 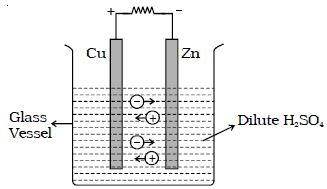 The action of the cell is explained in terms of the motion of the charged ions. At the zinc rod, the zinc atoms get ionized and pass into solution as Zn++ ions. This leaves the zinc rod with two electrons more, making it negative. At the same time, two hydrogen ions (2H+) are discharged at the copper rod, by taking these two electrons. This makes the copper rod positive. As long as excess electrons are available on the zinc electrode, this process goes on and a current flows continuously in external circuit. This simple cell is thus seen as a device which converts chemical energy into electrical energy. Due to opposite charges on the two plates, a potential difference is set up between copper and zinc, copper being at a higher potential than zinc. The difference of potential between the two electrodes is 1.08V.

Determination of Internal Resistance of a Cell Using Voltmeter

How Magnetic Field due to a Circular Loop Carrying Current?