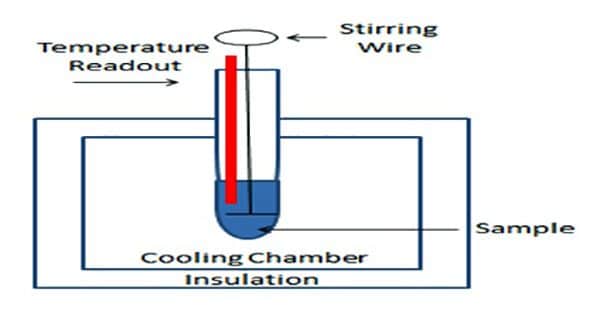 The arrangement for cryoscopic determination of the molar mass of a solute is shown in Figure.

The apparatus essentially consists of a freezing tube F fitted with a stirrer S and side tube A. The freezing tube is surrounded by an air jacket J to reduce the rate of cooling. The Beckmann thermometer is introduced into the freezing tube through an opening at the rubber or velvet cork fitted at the open end of the freezing tube. The entire assembly is then placed in an ice bath, B, kept at a temperature of 3 – 50 C below the freezing point at the solvent.

In the cryoscopic method uniform stirring of the solvent (or solution) is an important step. The solvent is stirred uniformly and slowly by the stirrer S, otherwise incorrect results may be obtained due to supercooling. The temperature gradually falls as the solvent cools down. At one point the thermometer will show a rapid rise of about 0.2 – 0.3°C, after which the mercury meniscus will remain steady for a considerable time. The sudden rise is due to initial supercooling, but as soon as a small amount of solid phase is formed the system quickly goes back to the true fleecing point indicated by the constant reading of the thermometer. This is the true freezing point of the solvent shown as cd in Figure.