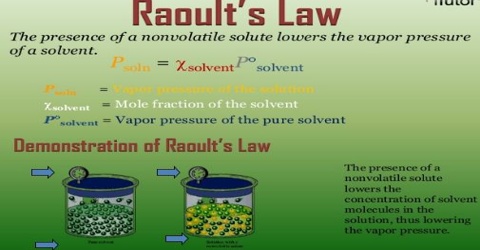 The vapor pressure of a liquid is governed by the ‘escaping tendency’ of the molecules in the liquid and the number of molecules per unit volume. If a solute is dissolved, the number of solvent molecules per unit volume decreases, since in the solution solute molecules will also be present. There is a negative deviation when the vapor pressure is lower than expected from the law. This occurs when forces between particles are stronger than those between particles in pure liquids. If we assume that the intermolecular forces between the solvent molecules remain unchanged, which is true for dilute solutions, then the number of solvent molecules leaving the unit area of the solution surface per unit time will be less than the number leaving the surface of the pure solvent under the same conditions. This action is observed in a mixture of chloroform and acetone. Here, hydrogen bonds cause the deviation. Another example of negative deviation is in a solution of hydrochloric acid and

where K is the proportionality constant and xN is the mole fraction of the solvent. For the pure solvent xN = I and p become equal to p0. Therefore, K is equal to p0. Thus,

which is one form of Raoult’s law.

It has, however, been assumed that the vapor of the solvent above the solution and the pure liquid behaves like an ideal gas. Both components of the mixture escape solution more eagerly than if the components were pure. This action is observed in mixtures of benzene and methanol and mixtures of chloroform and ethanol. Further assumptions have been made regarding the constancy of the intermolecular forces of the liquid in the presence of the solute.

Raoult’s Law gives us a quantitative relation between the fractional vapor pressure of components present in the vapor solution-phase above a liquid solution and the mole fraction of that component in the solution. Raoult’s Law is defined as a solution that has one or more unstable liquids in it.