Home Geology Variability of Solar Radiation at the Surface of Earth 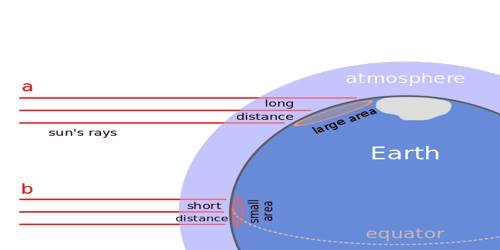 The earth’s surface receives most of its energy in short wavelengths. The energy received by the earth is known as incoming solar radiation which in short is termed as Insolation. It is radiant energy emitted by the sun, particularly electromagnetic energy. The amount and the intensity of insolation vary during a day, in a season and in a year. The factors that cause these variations in insolation are:

(i) the rotation of the earth on its axis;

(ii) the angle of inclination of the sun’s rays;

(iii) the length of the day;

(iv) the transparency of the atmosphere;

(v) the configuration of land in terms of its aspect.

The last two, however, have less influence.

The second factor that determines the amount of insolation is received is the angle of inclination of the rays. This depends on the latitude of a place. The higher the latitude the less is the angle they make with the surface of the earth resulting in slant sun rays. The area covered by vertical rays is always less than the slant rays. If more area is covered, the energy gets distributed and the net energy received per unit area decreases. Moreover, the slant rays are required to pass through the greater depth of the atmosphere resulting in more absorption, scattering, and diffusion.