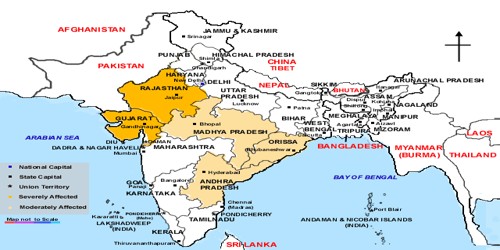 Droughts have cascading effects on various other aspects of the environment and society. Crop failure leading to scarcity of food grains (akal), fodder (trinkal), inadequate rainfall, resulting in a shortage of water (jalkal), and often a shortage in all the three (trikal) is most devastating. Large-scale death of cattle and other animals, migration of humans and livestock are the most common sight to be seen in the drought-affected areas. The scarcity of water compels people to consume contaminated water resulting in the spread of many waterborne diseases like gastroenteritis, cholera, hepatitis, etc. Droughts have both immediate as well as long-term disastrous consequences on the social and physical environments. Consequently, planning for drought has to take both aspects into consideration. Provision for the distribution of safe drinking water, medicines for the victims and availability of fodder and water for the cattle and shifting of the people and their livestock to safer places, etc. are some steps that need to be taken immediately. Identification of groundwater potential in the form of aquifers, transfer of river water from the surplus to the deficit areas, and particularly planning for inter-linking of rivers and construction of reservoirs and dams, etc. should be given a serious thought. Remote sensing and satellite imageries can be useful in identifying the possible river-basins that can be inter-linked and in identifying the groundwater potential. 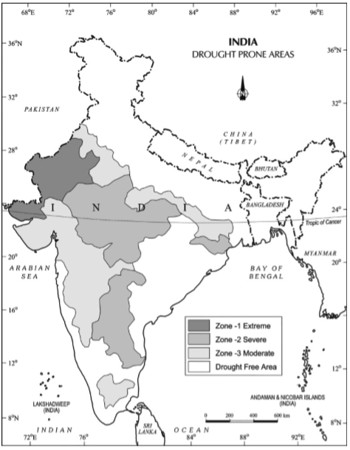 Dissemination of knowledge about drought-resistant crops and proper training to practice the same can be some of the long-term measures that will be helpful in drought-mitigation. Rainwater harvesting can also be an effective method for minimizing the effects of drought.