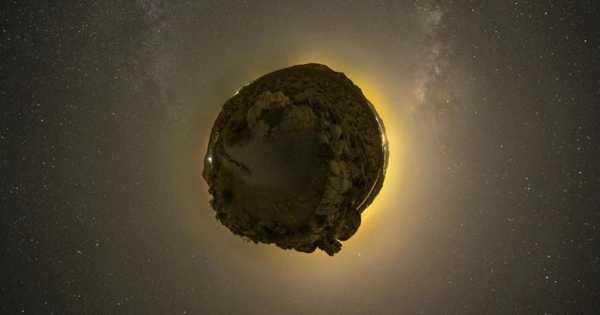 Astronomers discovered an asteroid with the shortest orbital period of any known asteroid in the Solar System using the powerful 570-megapixel Dark Energy Camera (DECam) in Chile. Every 113 days, the orbit of the roughly 1-kilometer-diameter asteroid brings it as close to the Sun as 20 million kilometers (0.13 au). Asteroid 2021 PH27, discovered in twilight images, also has the smallest mean distance of any known asteroid in our Solar System—only Mercury has a shorter period and smaller semi-major axis. Because the asteroid is so close to the Sun’s massive gravitational field, it experiences the most significant general relativistic effects of any known Solar System object.

Scott S. Sheppard of the Carnegie Institution of Science discovered the asteroid 2021 PH27 in data collected by the Dark Energy Camera mounted on the Victor M. Blanco 4-meter Telescope at Cerro Tololo Inter-American Observatory (CTIO) in Chile. The asteroid was discovered by Ian Dell’antonio and Shenming Fu of Brown University in the twilight skies on the evening of August 13, 2021.

Sheppard collaborated with Dell’antonio and Fu on observations with DECam for the Local Volume Complete Cluster Survey, which is studying the majority of the massive galaxy clusters in the local Universe. They took time out from observing some of the largest objects millions of light-years away to search for far smaller objects asteroids closer to home.

DECam, one of the world’s highest-performance wide-field CCD imagers, was designed for the DOE-funded Dark Energy Survey (DES), was built and tested at Fermilab, and was operated by the DOE and NSF between 2013 and 2019. DECam is currently used for programs covering a wide range of science. The Community Science and Data Center curates the DECam science archive (CSDC). CTIO and CSDC are NSF NOIRLab programs.

Using the powerful 570-megapixel Dark Energy Camera, astronomers discovered an asteroid with the shortest orbital period of any known asteroid in the Solar System. The asteroid is so close to the Sun’s massive gravitational field, it experiences the largest general relativistic effects of any known Solar System object.

Twilight, just after sunset or before sunrise, is the best time to look for asteroids in the direction of the two innermost planets, Mercury and Venus. Mercury and Venus, as any stargazer will tell you, never appear to get very far from the Sun in the sky and are always best visible near sunrise or sunset. The same can be said for asteroids that orbit close to the Sun.

Following the discovery of 2021 PH27, David Tholen of the University of Hawai’i calculated the asteroid’s position and predicted where it could be seen the following evening. Following that, on 14 August 2021, it was observed again by DECam, as well as the Magellan Telescopes at Chile’s Las Campanas Observatory. Then, on the evening of the 15th, Marco Micheli of the European Space Agency used the Las Cumbres Observatory network of 1- to 2-meter telescopes to observe it from CTIO in Chile and South Africa, as well as additional observations from DECam and Magellan, as astronomers postponed their originally scheduled observations to get a glimpse of the newly discovered asteroid.

“Though telescope time for astronomers is very precious, the international nature and love of the unknown make astronomers very willing to override their own science and observations to follow up new, interesting discoveries like this,” says Sheppard.

Planets and asteroids orbit the Sun in elliptical (or oval-shaped) orbits, with the ellipse’s widest axis having a radius known as the semi-major axis. The semi-major axis of 2021 PH27 is 70 million kilometers (43 million miles or 0.46 au), giving it a 113-day orbital period on an elongated orbit that crosses the orbits of Mercury and Venus.

It could have started out in the main Asteroid Belt between Mars and Jupiter before being dislodged by gravitational disturbances from the inner planets, which drew it closer to the Sun. Its high orbital inclination of 32 degrees, on the other hand, suggests that it could be an extinct comet from the outer Solar System that was captured into a closer short-period orbit when it passed close to one of the terrestrial planets. Future observations of the asteroid will provide more information about its origins.

Its orbit is likely to be unstable over long periods of time, and it will either collide with Mercury, Venus, or the Sun in a few million years, or be ejected from the inner Solar System by the gravitational influence of the inner planets.

“The fraction of asteroids that are inside Earth and Venus as opposed to outside will give us insights into the strength and composition of these objects,” Sheppard says. If the population of asteroids in orbits similar to 2021 PH27 appears depleted, it could tell astronomers how many near-Earth asteroids are piles of rubble loosely held together, as opposed to solid chunks of rock, which could have implications for asteroids on a collision course with Earth and how we might deflect them.

“Understanding the population of asteroids interior to Earth’s orbit is critical to completing the census of asteroids near Earth, including some of the most likely Earth impactors that may approach Earth during daylight and that cannot easily be discovered in most surveys that observe at night, away from the Sun,” Sheppard says. He goes on to say that because 2021 PH27 is so close to the Sun, “…its surface temperature reaches nearly 500 degrees C (around 900 degrees F) at closest approach, hot enough to melt lead.”

Because it is so close to the Sun’s massive gravitational field, 2021 PH27 experiences the most general relativistic effects of any known Solar System object. This manifests itself as a minor angular deviation in the asteroid’s elliptical orbit over time, a phenomenon known as precession, which amounts to about one arcminute per century.

The asteroid is now in solar conjunction, which means it is moving behind the Sun from our perspective. It is expected to reappear in Earth’s view in early 2022, when new observations will be able to determine its orbit in greater detail, allowing the asteroid to be given an official name.