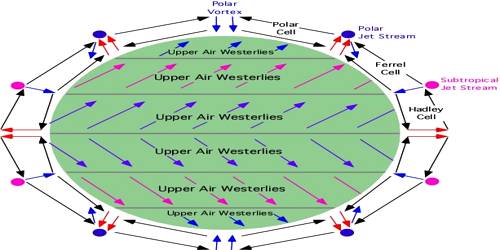 Mechanism of Jet Stream and Upper Air Circulation in the Winter Season in Indian Subcontinent:

Jet Stream and Upper Air Circulation: The pattern of air circulation discussed above is witnessed only at the lower level of the atmosphere near the surface of the earth. Jet stream, narrow, swift currents or tubes of air found at heights ranging from 7 to 8 mi (11.3–12.9 km) above the surface of the earth. Jet streams get bifurcated into two branches, after striking with the Tibetan highlands. Is it essential to distinguish Geomorphic Agents and Geomorphic Processes?