Inside the ovary of a flower there lies the ovules. In each of these ovules one megaspore mother cell (female reproductive mother cell or egg mother cell) is produced. This cell undergoes meiotic division to give rise to four haploid megaspores. In most of the cases three out of four degenerate and only one cell survives.

The nucleus of the survived large cell divides mitotically to give rise to two at first, next from these two forms four and then from four to eight nucleus. These eight nucleus remains at two poles of a sac like structure. The sac like structure is called embryo sac. One nucleus from each pole moves to the centre of the embryo sac and fuse together to form a secondary nucleus. 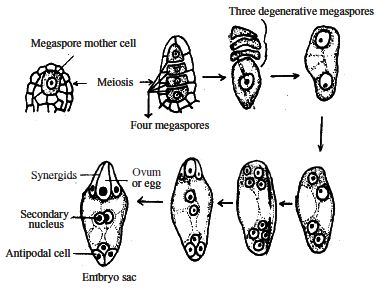 Importance of Dispersal of Fruits and Seeds