Home Biology What is Fertilization?

We know there are small organs named ovules in the ovary of a flower. These ovules later on develop to seeds. The seeds we see in the fruits like Mango, Jambolina (Jaam), Lichi, Jackfruit etc. all are the developed ovule. When the ovule gradually develops to seeds at the same time the ovary of the flower gradually develops to a fruit. Ovules are developed to seed as a result of fertilization. Usually without fertilization ovules cannot be developed to seeds. 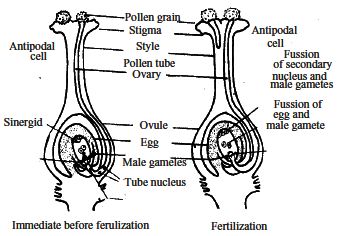 Union of female and male reproductive cell: The pollen tube gradually proceeds and moves downwards and ultimately reaches the embryo sac. When the pollen tube reaches the embryo sac the tip of the pollen tube bursts and the  two male gametes are released. One of the male gametes. (sperm cells) unites with the egg and complete the process of fertilization. The other male gamtees unite with the secondary nucleus. This union is called triple fusion. This process is known as double fertilization.