The embryo develops after fertilization. A diploid zygote is developed as a result of the union of male and female gametes. It is also called a fertilized egg. The zygote remains in resting stage for sometimes (maybe few hours, days or even months). After the resting period, the zygote cell undergoes a transverse division to form a bi-celled pm-embryo. The pro-embryo then undergoes successive cell division at different plains to find an embryo. An embryo consists of cotyledon and an axis. The upper portion of the axis is the plumule and the lower portion is the radicle. In a monocot seed there is only one cotyledon (e.g. coconut, paddy etc) and in a dicot seed, there are two cotyledons (e.g. mango, bean, gram, pea etc.). 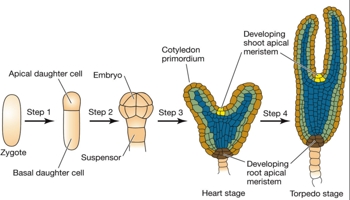 In many plants endosperm is present in a mature seed. During germination, the embryo absorbs food from the endospenn. These types of seeds are called endospermic seed – e.g. Paddy, Wheat, Manus etc. In many other plants endosperm being absorbed and stored in cotyledon and is utilised during germination. This type of seeds is called non-endospenn seed e.g. Gram seed, Pea, Mango etc.

Dispersal of Fruits and Seeds

Importance of Dispersal of Fruits and Seeds