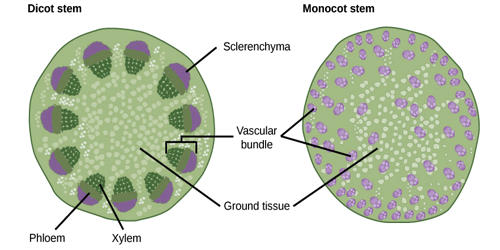 Dicot stems have a well-defined epidermis with cuticle, a layer of dermis along with multicellular stem hair. Monocot stems are a circular-shaped stem with lateral branches and are bounded with a layer of the dermis. The internal structure of a dicot stem mainly consists of epidermis, hypodermis, cortex endodermis, pericycle, vascular strand, and pith. The internal structure of a monocot stem mainly comprises a well-developed epidermis, hypodermis, ground tissue, and numerous dispersed vascular bundles. Sunflower and Cucurbita are examples of dicot stems. Tulips, onions, lilies, and garlic are examples of monocot stems.

Difference between Anatomical Structures of Dicot stem and Monocot stem