Home Physics Excitation and Ionization Potential of an Atom 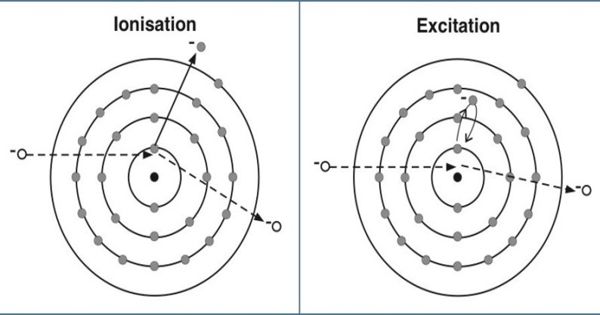 Excitation is the addition of a discrete amount of energy to a system such as an atomic nucleus, an atom, or a molecule. It is the result of energy being given to an electron moving it to a higher energy level. Ionization potential is the amount of energy required to remove the most loosely bound electron from a neutral, gaseous atom. If enough energy is given to the electron to remove it from the atom ionization has occurred.

According to Bohr’s theory, there are certain discrete orbits permitted for the motion of the electron. An electron can revolve in these orbits without radiating energy. An atom is said to be in the ground state when its energy is least. Before an atom can emit spectral radiation, the electron in it has to be raised to a higher orbit. This process is known as the excitation of the atom. The energy required to raise an atom from its normal state into an excited state is called the excitation potential energy of the atom. If the energy supplied to an electron is such that the electron is lifted from its ground state to one of the higher allowed orbits, the atom will be excited and the energy supplied is called excitation energy or excitation potential. For example, the energy required to transfer the electron in a hydrogen atom from the ground state to the first excited state = (13.6-3.4) = 10.2eV. The energy required to raise it to the second excited state = (13.6 – 1.51) = 12.09 eV. The potentials corresponding to these energies are called as the excitation potentials.

The Sand Dune Interactions Force Others to Keep Their Distance

After 175 Years, Two False Conjectures, And The Birth Of Computing, This Theorem Finally Has A Proof