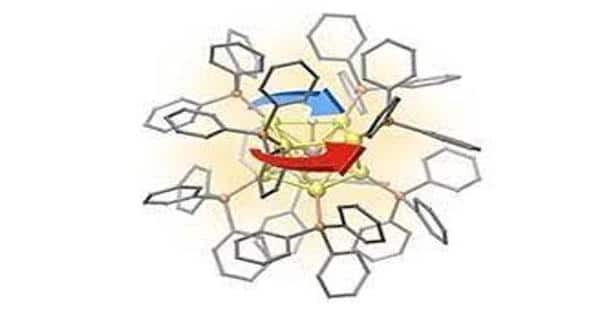 Nuclear magnetic resonance (NMR) spectroscopy can be used to assess the shielding’s strength. Even within a nanometer-sized particle, the internal magnetic shielding varies dramatically on an atomic-length scale. Understanding these atom-scale variations is only possible by using a quantum mechanical theory of the electronic properties of each atom that makes up the nanoparticle.

The research group developed a method to compute, visualize and analyze the circulating electron currents inside complex 3D nanostructures. The method was applied to gold nanoparticles with a diameter of only about one nanometer.

Professor Hannu Häkkinen’s research group at the University of Jyväskylä has now developed a method to compute, visualize, and analyze the circulating electron currents inside complex 3D nanostructures in collaboration with the University of Guadalajara in Mexico. The method was used on gold nanoparticles with diameters of less than one nanometer.

The calculations shed light on previously unanswered experimental results from previous NMR measurements in the literature concerning how magnetic shielding inside the particle changes when one gold atom is replaced by one platinum atom.

A new quantitative measure to characterize aromaticity inside metal nanoparticles was also developed based on the total integrated strength of the shielding electron current.

“Aromaticity is one of the oldest concepts in chemistry, and it has traditionally been associated with ring-like organic molecules and their delocalized valence electron density, which can generate circulating currents in an external magnetic field. However, quantitative criteria for the degree of aromaticity that are widely accepted have been lacking. In principle, our method yields a new tool for studying and analyzing electron currents at the resolution of one atom inside any nanostructure. Our work was regarded as a significant advancement in the field by the peer reviewers who reviewed it “Professor Häkkinen, who coordinated the research, says.

Gold nanoparticles (AuNPs) are currently playing an important role in human welfare in clinical diagnosis and a variety of biomedical applications. AuNPs-based technologies are proving to be promising approaches in cancer research and AIDS treatment, according to a growing body of research.

What is Underwater Acoustic Communication?