Dye-sensitized solar cells (DSSCs) have arisen as a technically and economically credible alternative to the p-n junction photovoltaic devices. Dye-sensitized solar cells used in low-light conditions could perform more consistently thanks to improved understanding of the role additives play in optimizing electrolytes. These cells belong to the group of thin-film solar cells which have been under extensive research for more than two decades due to their low cost, simple preparation methodology, low toxicity, and ease of production. Laptops and mobile phones, among other devices, could be charged or powered indoors, away from direct sunlight, using dye-sensitized solar cells (DSCs), which have achieved efficiencies of up to 34% at 1000 lux from a fluorescent lamp. Still, there is lot of scope for the replacement of current DSSC materials due to their high cost, less abundance, and long-term stability.

It provides a technically and economically credible alternative concept to present-day p–n junction photovoltaic devices. Copper-based electrolytes containing various combinations of additives have been used to achieve these efficiencies, with varying results to date. It is a third-generation photovoltaic (solar) cell that converts any visible light into electrical energy.

DSSC is a disruptive technology that can be used to produce electricity in a wide range of light conditions, indoors and outdoors, enabling the user to convert both artificial and natural light into energy to power a broad range of electronic devices. Interaction of these additives with the copper species in the electrolyte has been a concern over the last few years, and progress has been undermined by a lack of understanding about the true effect of the different additives. 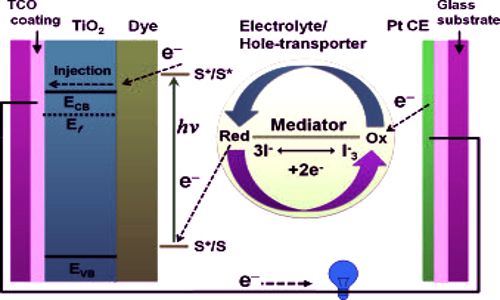 Dye-sensitized solar cells have been investigated intensively during the last three decades. Nevertheless, there are still many aspects to be explored to further improve their performance. Now, research funded by the Australian Centre for Advanced Photovoltaics (ACAP) and supported by the ARC Centre of Excellence in Exciton Science, has demonstrated the crucial importance of the molecules 4-tert-butylpyridine (tBP) and 1-methyl-benzimidazole (NMBI) as optimal additives for maximizing the performance of the copper redox mediators.

The results have been published in the journal Advanced Energy Materials. Dye molecules can be modified endlessly for better performance. For instance, steric groups can be introduced to slow down recombination reactions and avoid unfavorable aggregation.

Joint first author Dr. Sebastian Fürer of Monash University and Exciton Science said: “Researchers were previously a bit worried because tBP can interact with copper complexes and everyone said, ‘let’s try to avoid it’. People thought this is detrimental to the solar cell performance but we had a closer look at this.

Dye-sensitized solar cells have attracted much attention in recent years, because of their good photovoltaic performance, specifically under low-light conditions, as well as their flexibility in terms of colors and appearance, their relatively simple fabrication procedures, and their potential low cost. In times of fossil fuel shortage, increasing crude oil prices, as well as the rejection of conventional energy sources (e.g. coal or nuclear power plants), sustainable energy forms become more and more the focus of attention. Hydropower, wind power, geothermal power, or biomass processing are but a few of these sustainable resources.

According to Sebastian, employing the correct additive in new copper redox mediators is now likely to become standard in future efforts to improve DSC performance.

“You can’t leave it out, because the solar cell goes from 9% efficiency to less than 1%. It’s really a huge difference,” he said.

“Instead of trying to avoid that interaction, for the future, researchers will need to make sure this interaction happens but only in a beneficial way. We’ve looked at all the different parts and solved a big question. The results are very conclusive.”

A disadvantage compared to other solar cell technologies is the use of a liquid redox electrolyte in efficient DSCs. This makes encapsulation problematic and it makes the devices less compatible with other solid-state photovoltaic technologies. In order to make a significant impact in the field of photovoltaics, the performance of DSC needs to be further improved.