According to Newton’s first law of motion, a body possesses the property called directional inertia; the inability of the body to change its direction. This means that without the application of an external force, the direction of motion can not be changed. Thus when a body is moving along a circular path, some force must be acting upon it, which continuously changes the body from its straight-line path (Figure). 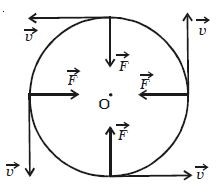 Hence for circular motion, a constant force should act on the body, along the radius towards the centre and perpendicular to the velocity of the body. This force is known as centripetal force.

If m is the mass of the body. then the magnitude of the centripetal force is given by