In order to understand the concept of wave motion, let us drop a stone in a trough of water. We find that small circular waves seem to originate from the point where the stone touches the surface of water. These waves spread out in all directions. It appears as if water moves away from that point. If a piece of paper is placed on the water surface, it will be observed that the piece of paper moves up and down, when the waves pass through it. This shows that the waves are formed due to the vibratory motion of the water particles, about their mean position. 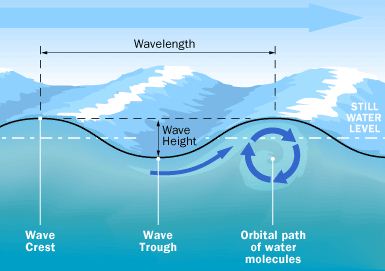 Wave motion is a form of disturbance which travels through a medium due to the repeated periodic motion of the particles of the medium about their mean position. The motion is transferred continuously from one particle to its neighbouring particle.