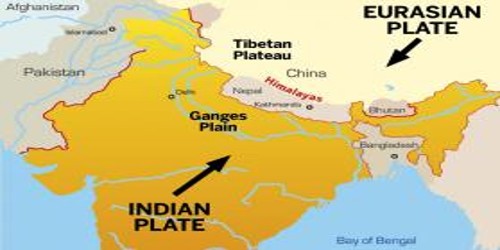 Earthquakes are by far the most unpredictable and highly destructive of all the natural disasters. Earthquakes that are of tectonic origin have proved to be the most devastating and their area of influence is also quite large. These earthquakes result from a series of earth movements brought about by a sudden release of energy during the tectonic activities in the earth’s crust. As compared to these, the earthquakes associated with the volcanic eruption, rock fall, landslides, subsidence, particularly in the mining areas, impounding of dams and reservoirs. etc. have a limited area of influence and the scale of damage.

The Indian plate is moving at a speed of one centimeter per year towards the north and northeastern direction and this movement of plates are being constantly obstructed by the Eurasian plate from the north. As a result of this, both the plates are said to be locked with each other resulting in accumulation of energy at different points of time. Excessive accumulation of energy results in building up of stress, which ultimately leads to the breaking up of the lock and the sudden release of energy, causes earthquakes along the Himalayan arc. Some of the most vulnerable states are Jammu and Kashmir. Himachal Pradesh, Uttaranchal, Sikkim, and the Darjiling and subdivision of West Bengal and all the seven states of the northeast.

Apart from these regions, the central-western parts of India, particularly Gujarat (in 1819, 1956 and 2001) and Maharashtra (in 1967 and 1993) have also experienced some severe earthquakes. Earth scientists have found it difficult to captain the occurrence of earthquakes in one of the oldest, most stable and mature landmasses of the peninsular block for a long time.

National Geophysical Laboratory, Geological Survey of India, Department of Meteorology, Government of India, along with the recently formed National Institute of Disaster Management, have made an intensive analysis of more than 1.200 earthquakes that have occurred in India in different years in the past, and based on these, they divided India into the following five earthquake zones:

Out of these, the first two zones had experienced some of the most devastating earthquakes in India.