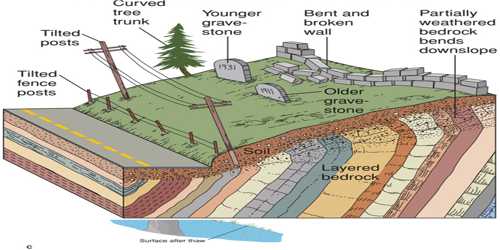 These movements are most prevalent in humid climatic regions and occur over gentle to steep slopes. Movement of water-saturated clayey or silty earth materials down low-angle terraces or hillsides is known as earthflow. Quite often, the materials slump making step-like terraces and leaving arcuate scarps at their heads and an accumulation bulge at the toe. When slopes are steeper, even the bedrock, especially of soft sedimentary rocks like shale or deeply weathered igneous rock, may slide downslope.

A large-scale and sudden release of energy in the interior of the earth gives rise to rapid earth movements. As the speed of these movements is high so they are called rapid movements. 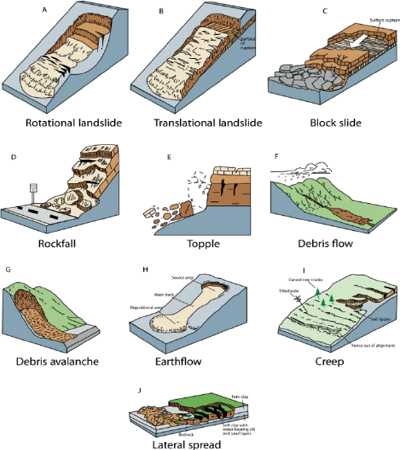 Another type in this category is mudflow. In the absence of vegetation cover and with heavy rainfall, thick layers of weathered materials get saturated with water and either slowly or rapidly flow down along definite channels. It looks like a stream of mud within a valley. When the mudflows emerge out of channels onto the piedmont or plains, they can be very destructive engulfing roads, bridges, and houses. Mudflows occur frequently on the slopes of erupting or recently erupted volcanoes. Volcanic ash, dust, and other fragments turn into mud due to heavy rains and flow down as tongues or streams of mud causing great destruction to human habitations. A third type is the debris avalanche, which is more characteristic of humid regions with or without vegetation cover and occurs in narrow tracks on steep slopes. This debris avalanche can be much faster than the mudflow. The debris avalanche is similar to snow avalanche.