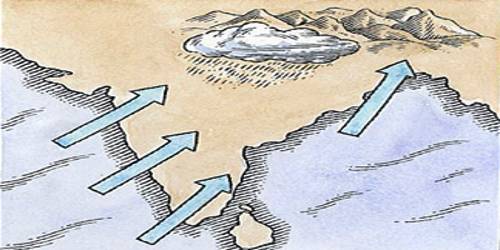 The Southwest Monsoon season in India starts with the onset of the Southwest Monsoon winds in June and continues till the middle of September. As a result of the rapid increase of temperature in May over the northwestern plains, the low-pressure conditions over there get further intensified. This is called the rainy season. By early June, they are powerful enough to attract the trade winds of Southern Hemisphere coming from the Indian Ocean. These southeast trade winds cross the equator and enter the Bay of Bengal and the Arabian Sea, only to be caught up in the air circulation over India. Passing over the equatorial warm currents, they bring with them moisture in abundance. After crossing the equator, they follow a southwesterly direction. That is why they are known as southwest monsoons.

The Southwest Monsoon winds are rain-bearing strong winds and blow at an average speed of 30 km per hour. The rain in the southwest monsoon season begins rather abruptly. One result of the first rain is that it brings down the temperature substantially. This sudden onset of the moisture-laden winds associated with violent thunder and lightning is often termed as the “break” or “burst” of the monsoons. They usually cause thunder, lightning and heavy downpour. This sudden onset of monsoons is known as the burst of the monsoons. 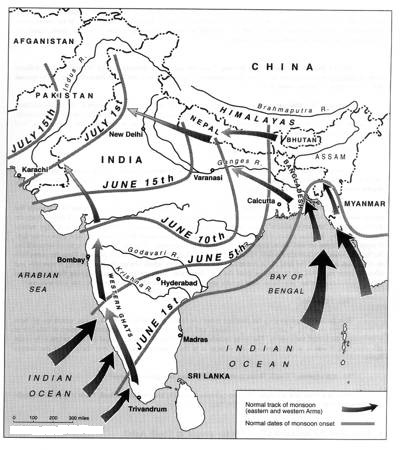 The monsoon may burst in the first week of June in the coastal areas of Kerala, Karnataka, Goa, and Maharashtra while in the interior parts of the country, it may be delayed to the first week of July. The day temperature registers a decline of 5°C to 8°C between mid-June and mid-July. As these winds approach the land, their southwesterly direction is modified by the relief and thermal low pressure over northwest India.

The monsoon approaches the landmass in two branches:

(i) The Arabian Sea branch and,

(ii) The Bay of Bengal branch.