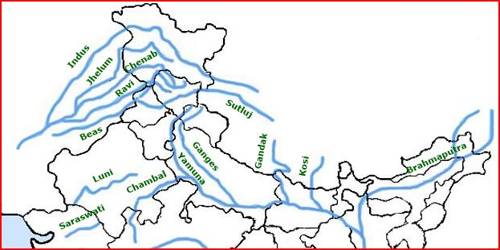 Indian drainage system may be divided into various bases. A river drains the water collected from a specific area, which is called its ‘catchment area’. An area drained by a river and its tributaries is called a drainage basin. On the basis of discharge of water (orientations to the sea), it may be grouped into:

(i) the Arabian Sea drainage; and

(ii) the Bay of Bengal drainage. They are separated from each other through the Delhi ridge, the Aravalis, and the Sahyadris. Nearly 77 percent of the drainage area consisting of the Ganga, the Brahmaputra, the Mahanadi, the Krishna, etc. are oriented towards the Bay of Bengal while 23 percent comprising the Indus, the Narmada, the Tapi, the Mahi and the Periyar systems discharge their waters in the Arabian Sea. 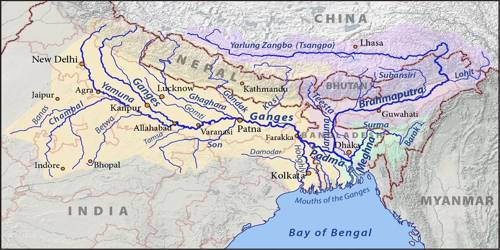 On the basis of the size of the watershed, the drainage basins of India are grouped into three categories:

(i) Major river basins with more than 20.000 sq. km of the catchment area. It includes 14 drainage basins such as the Ganga, the Brahmaputra, the Krishna, the Tapi, the Narmada, the Mahi, the Pennar, the Sabarmati, the Barak etc.

(ii) Medium river basins with catchment area between 2,000-20.000 sq. km incorporating 44 river basins such as the Kalindi, the Periyar, the Meghna. etc.

(iii) Minor river basins with the catchment area of less than 2.000 sq. km include the fairly good number of rivers flowing in the area of low rainfall.

Large rivers flowing on the Peninsular plateau have their origin in the Western Ghats and discharge their waters in the Bay of Bengal. Identify these rivers of South India.

The Narmada and Tapi are two large rivers which are exceptions. They along with many small rivers discharge their waters in the Arabian Sea. Name these rivers of the western coastal region from the Konkan to the Malabar Coast. On the basis of the mode of origin, nature, and characteristics, the Indian drainage may also be classified into the Himalayan drainage and the Peninsular drainage. Although it has the problem of including the Chambal, the Betwa, the Son, etc. which are much older in age and origin than other rivers that have their origin in the Himalayas, it is the most accepted basis of classification.