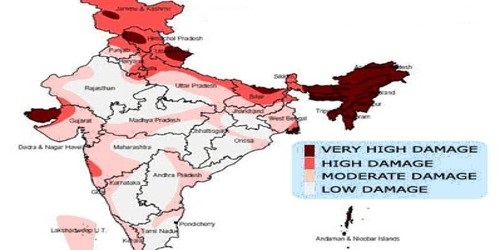 Very High Vulnerability Zone: Highly unstable, relatively young mountainous areas in the Himalayas and Andaman and Nicobar, high rainfall regions with steep slopes in the Western Ghats and Nilgiris, the north-eastern regions, along with areas that experience frequent ground-shaking due to earthquakes, etc. and areas of intense human activities, particularly those related to construction of roads, dams, etc. are included in this zone. 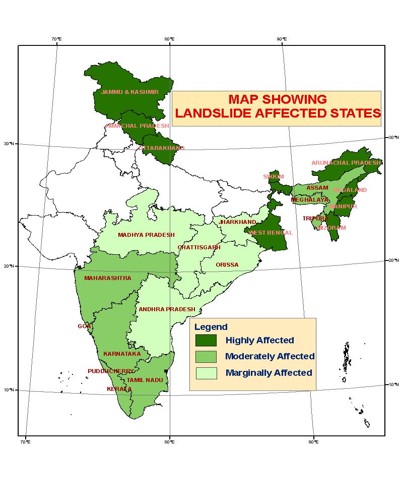 Moderate to Low Vulnerability Zone: Areas that receive less precipitation such as Trans-Himalayan areas of Ladakh and Spiti (Himachal Pradesh), undulated yet stable relief and low precipitation areas in the Aravali, rain shadow areas in the Western and Eastern Ghats and Deccan plateau also experience occasional landslides. Landslides due to mining and subsidence are most common in states like Jharkhand, Orissa. Chhattisgarh, Madhya Pradesh, Maharashtra, Andhra Pradesh, Karnataka, Tamil Nadu, Goa, and Kerala.

Other Areas: The remaining parts of India, particularly states like Rajasthan, Haryana, Uttar Pradesh, Bihar, West Bengal (except district Darjeeling), Assam (except district Karbi Anglong) and Coastal regions of the southern States are safe as far as landslides are concerned.