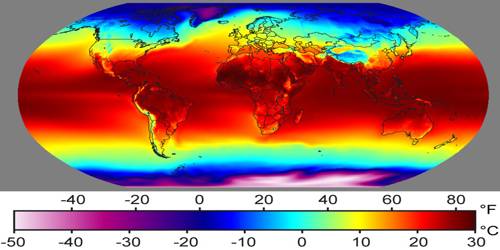 The interaction of insolation with the atmosphere and the earth’s surface creates heat which is measured in terms of temperature. While heat represents the molecular movement of particles comprising a substance, the temperature is the measurement in degrees of how hot (or cold) a thing (or a place) is.

The temperature of air at any place is influenced by

(i) the latitude of the place;

(ii) the altitude of the place;

(iii) distance from the sea, the air-mass circulation;

(iv) the presence of warm and cold ocean currents;

The altitude: The atmosphere is indirectly heated by terrestrial radiation from below. Therefore, the places near the sea-level record higher temperature than the places situated at higher elevations. In other words, the/ temperature generally decreases with increasing height. The rate of decrease of temperature with height is termed as the normal lapse rate. It is 6.5°C per 1,000 m.

Distance from the sea: Another factor that influences the temperature is the location of a place with respect to the sea. Compared to land, the sea gets heated slowly and loses heat slowly. Land heats up and cools down quickly. Therefore, the variation in temperature over the sea is less compared to land. The places situated near the sea come under the moderating influence of the sea and land breezes which moderate the temperature.

Why is the surface of the earth uneven?