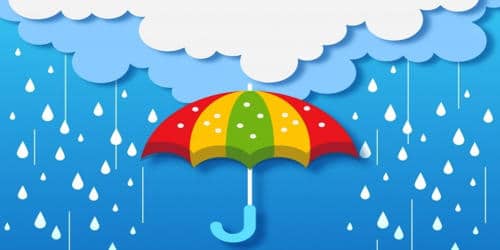 My favorite season is Rainy Season. We know that Bangladesh is a land of monsoon. Bangladesh is called the land of six seasons. It has a temperate climate because of its physical location. Though the climate of Bangladesh is mainly sub-tropical monsoon, ie warm and humid; Bangla calendar year is traditionally divided into six seasons: Grisma (summer) Barsa (rainy), Sarat (autumn), Hemanta (late autumn), Shhit (winter) and Basanta (spring) (summer), Each season comprises two months, but some seasons flow into other seasons, while others from. are short. Actually, ‘Bangladesh has three distinct seasons: the pre-monsoon hot season from March through May, rainy monsoon season which lasts from June through October, dry winter season from November through February. However, March may also be considered as the spring season, and the period from mid-October through mitch mid-November may be called the autumn. Among these varieties of the season, I like the rainy season for its beauty, blessings, and nature to purify the environment. For me, it is the most colorful of all the seasons. Rainy season adds scenic beauty to the environment. It gives a new life to the earth.

The rainy season (barsa) traditionally spreads over Asadh and Shravan (mid-June to mid-August). However, the rainy season may start from the end of Baishakh and last up to the beginning of Kartik (mid-May to late-October). During the rainy season, the southwest monsoon winds bring plenty of rainfall (70 to 85 percent of the annual total) and occasionally lasting for days without end without any break. Most of the floodplains of the country remain covered during this period. In other places, like the central Parts of Bangladesh, it lasts for about 3 to 4 months. In rural areas, boat navigation becomes a common mode of transport during this season.

The rainy season is of great importance for the farmers as they really need more water for their crops cultivation. Plants, half-dead with the summer heat, receive a new lease of life under cool rains and Bangladesh becomes green. A large number of farmers depend upon monsoon-rains to meet the food requirement of their families. Farmers are busy for harvesting Jute, in the flood-free areas, and/or shallowly flooded (0 to 30 cm depth) areas for preparing paddy seedbeds. They engage in agricultural activities not to sell the crops, but for their own needs too.

Barsha is also important for the fishing community of Bangladesh. Hilsha fish is available in plenty during this season. The covered floodplains become a large habitat for a wide variety of aquatic flora and fauna. At this time plenty of safe to eat herbs grow everywhere, as does the national flower Shapla.

This is the season for Keya, Kadarn, Kamini, Jul, Gandharaj, and other fragrant flowers, as well as fruits like Guava, Pineapple, and Pomelo. Nature gets a fresh outlook and a new life.

But the devastating effect of floods every year is irritating and pathetic. During the Rainy Season, people face a lot of difficulties. Excessive rains cause floods and the absence of rain creates drought. Floods cause heavy damages to our life. Houses are destroyed, cattle are washed away and many people become homeless or shelterless. The whole country went underwater. After flood effects are much as the epidemic starts. It causes diarrhea, dysentery, typhoid, and other digestive system disorders.

I like drizzling, soft rain. I love to watch rain beside the window and love to be wet in rain on, the rooftop. In spite of these difficulties, the rainy season brings happiness to the minds of the people. I enjoy the fresh, clean roads and greets and environment. I think in this way God washes away the dirt and purifies the world. We also celebrate Many Indian festivals with great enthusiasm this season.

What is a Dentist?